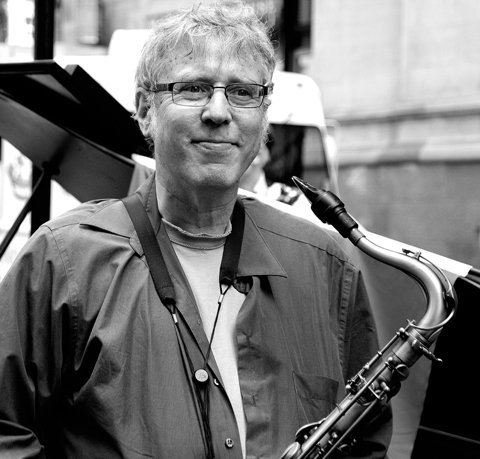 David Intrator began his career as a classical musician.

After studying music theory and composition at Harvard, Intrator moved to New York City where he worked as a composer and freelance bassoonist, performing in venues like Carnegie Hall and Lincoln Center.

Fascinated by the freedom and inventiveness of jazz improvisation, he began studying the tenor saxophone in the 1980s. Over the following years he performed both in New York and Europe with jazz luminaries including Gilad Hekselman and Peter Brendler.

But an epiphany of sorts happened when he joined the drum circles at Occupy Wall Street in October 2011. “What I realized most of all at Occupy,” David Intrator notes, “is that music is essentially a social thing. It is not a product, but a condition that occurs among people. If you’re not touching people, moving people, you’re not really doing anything at all.”

The Occupy experience has led David Intrator to more deeply explore the world of groove-based improvisation.

He’s taken everything he’s learned from classical and jazz to create a new music that connects the western harmonic tradition with deep electronic and acoustic grooves, all with the aim to connect people not only to music, but to one another and to themselves.

David Intrator is also an influential figure in the world of communications, with his popular seminars and workshops on storytelling and creativity.

“Music is essentially storytelling,” he says. “It’s about tension and release, about shape and rhythm. And these same principles apply no matter what medium youre working in.”

Indeed, whether he’s editing a film, shooting a photo or writing an essay, musical concepts are always the foundation of his thinking and his sensibility.